Quote of the Week

"I assure you that if you have to wait even until the next life to be blessed with a choice companion, God will surely compensate you."
President Ezra T. Benson, To the Single Adult Sisters of the Church, 1988.

The Social Stigma of Being Single 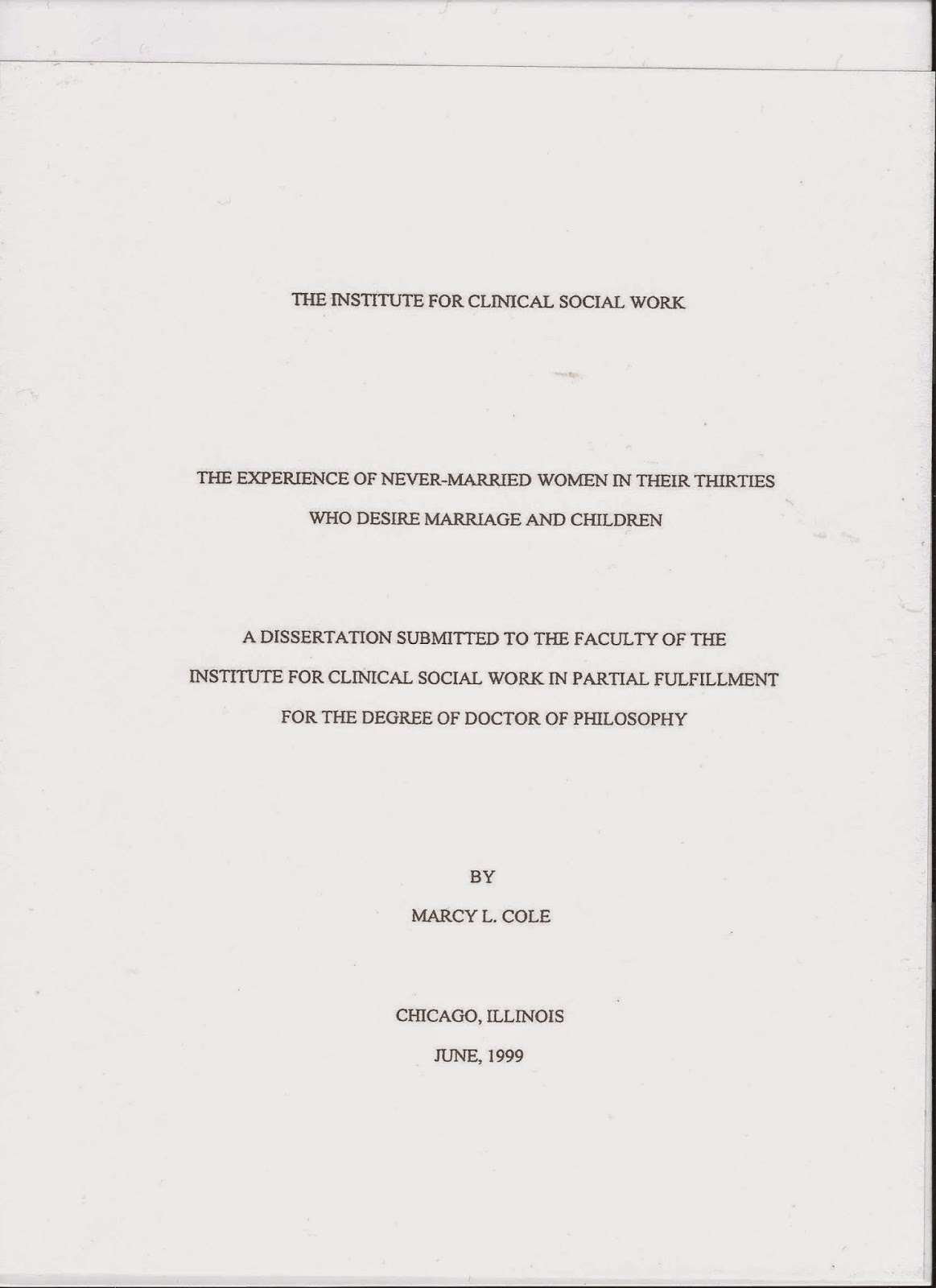 The Experience of Never-Married Women in Their Thirties Who Desire Marriage and Children
Long name, amazing results!
I stumbled upon this 279 page dissertation pdf file (Marcy Cole, The Institute for Clinical Social Work, Chicago, 1999) after Googling "Social Stigma of being Single"
Three nights and 14 pages of close reading notes later, I am ready to report because I found this study, understandably, FASCINATING.
25 women, all never married, between the ages of 29-39, educated and financially independent, were interviewed for this study.
Since I can hear the groans of those who don't share my enthusiasm for reading 200+page online dissertations for fun, here is my breakdown of the published results summarized for your benefit.
You're welcome. But I hope I'm not the only one who wants to know,
WHY HASN'T A SIMILAR STUDY BEEN DONE IN UTAH?!!!
We certainly have bigger pool of candidates than Illinois, not exactly the virgin capital of the world.

First off, the word "old maid" according to the Oxford English Dictionary has been successfully degrading single women since 1783, "Tis a cursed thing to be an old maid," (R Dixon, Cardian v iii. 34) while other derogatory cousins such as "spinster," "unmarried," "single" all carry with them the weight of general unpleasantness.
Single women are ignored, marginalized, viewed as victims of outrageous stereotypes, slapped with psychological reasons to excuse our imbalance. We are all irresponsible, damaged,  lonely, depressed, incomplete, immature, unfit, too obsessed with love and romance, too picky yet stuck like dead fish in a dried up dating pool due to a demographic imbalance that only gets worse the older we get.
It's a hopeless situation.
Thanks to socialization, the expectation that us girls are brought up on, (starting at a very young age) that we will, eventually, achieve the ideological norm of getting married and having children becomes a social stigma once we reach a certain age and realize IT HASN'T HAPPENED YET.
Men, interestingly enough, do not experience this stigma which explains their absence from the study.
The single women's experience has been divided into "stages" all of which I found eerily familiar:

Stage 1: The Time Warp
The realization or "wake up call" that certain life events have not yet come to pass which leads to over-consuming feelings of bewilderment and panic.

Stage 2: How do I Meet Thee?
In our desperation we jump on the "gerbil dating wheel" going out with anyone remotely available, signing up for online dating sites (Which aren't mentioned at all because the year was 1999 when this was published!) perhaps even cohabiting just so we won't have to be alone, as our mothers with their wagging fingers warned us was a fate worse than death, before wrapping their legs around their (worthy priesthood holding if Mormon) hubbies crying "Hallelujah, thank God, I already have a man!"
The pressure for single women not to be alone is great, indeed.

Stage 3: The Sinkhole
This is where I keep getting stuck. When no man materializes for us and we spend too many Friday nights, alone, with our old pal Ben & Jerry's drowning ourselves in self-pity, despair becomes overwhelming and we fall into a downward spiral of depression and lethargy. Life has no meaning, purpose or direction for single sisters in the Mormon faith. A wholesome, virtuous homebody does not a Heavenly Father bless. Pass the short, fat, juicy worms, please.

Stage 4: The Sine Wave Experience
"Anticipation is keeping me waitin'!" Sooner or later we do bounce back, climb out of the sinkhole, find activities and goals to renew our focus on. This is where the study starts to deviate from single women to all women in general. This is why men are from Mars. They just don't get how women can be consistently up and down. It's a roller coaster of emotions. These mood swings are amplified for single women, especially during PMS. We fluctuate between giddy joy at all the possibilities life has in store for us and despair that it will never be realized. While our biological clock keeps tick, tick, ticking on...

Stage 5: Free to be Me or "Doin' my strong woman number"
All Gen Xers will remember this
Free to Be You and Me was an audio record and reel-to-reel film  series that was a staple in my first grade class at Rose Avenue Elementary in Modesto, California (which my brain had completely blocked out until YouTube came along). Basically, the idea of this stage is that single women can embrace that feminism ideal of self actualization, become their best self (as Oprah would say) in all areas where men are lacking such as their professional and family connections. Taking up new hobbies and interests. Forming strong networks of support through friends, church acquaintances, finding God and even therapy. Whatever it takes to cope. Always emerging victorious and stronger. Composing our own version of "Let it Go" and singing it to the world.

There is a distinct correlation for singles versus marrieds between work and life satisfaction. A brick wall I'm forever banging my head against as someone who just can't achieve success on the socio-economic ladder: two bachelors degrees, certifications, yet stuck in the food service industry. I'm living the American Dream! So, why do I feel so depressed?

Singles struggle with the desire for intimacy versus desire for isolation and independence.
The study never reveals if any of the 25 women were still virgins but many of them admitted to seeking therapy out of regret for their past sexual relations with men who never valued them and finding the closure they needed to move past the pain and renew hope that the next relationship that came along might lead to marriage.

That's where the study clashed for me.
The phrase "having it all" kept popping up and I thought that was interesting considering the debate is still raging today. Over and over, the study insists on proving that single, independent, feminist-minded women can still find happiness and fulfillment without a husband, home and children of their own to focus on. I was never one of those women who feared I'd lose my identity if I got too close to a man who desired marriage (do such men even exist?). I was never one of those women content to party my life away, sleeping around and whoring it up until "the wake up call" stage kicked in as "The Economics of Sex" YouTube video shows the forlorn woman slumped outside the wedding chapel, ready to settle down but unable to find compatibility as all the marriage minded men are either already taken or not ready to commit yet.

I guess for those of us wise enough to hold out and wait for Mr. Right, we just have to keep hoping there's still one or two emotionally available men out there looking and preparing themselves to be worthy of us as much as we have been working on self-improvement to be ready for them.

Are you volatile (dangerous, out of control) or do you have a healthy self image, finding fulfillment in counting your blessings? Being the best aunt in Zion, visiting teacher, temple worker, (if you still have a current recommend in the Mormon faith) and all around do-gooder is admirable but somehow, I don't find it very fulfilling any more and such activities sure as heck don't pay the bills or have ever opened any doors to a satisfying career. It's certainly never led me to any long term relationships. I found it interesting that many of the women in the study also reported unresolved family issues, traumatic childhoods with abuse, divorce and absent parents who failed to be there for them while those who had a strong network of supporting and encouraging family and friends were better off.

All I can do is revert back to my meager blessings: two nephews, a little sister who doesn't mind me tagging along observing her experiencing all those life events I seem destined never to have in this life, a younger brother with whom I can easily spend an hour on the phone talking to about everything under the sun and a good platonic guy friend at my work who can always make me laugh as well as a handful of single girlfriends with whom I can find support and encouragement.

It was nice to read this very, very long dissertation and find validation in my own experience as a never-married woman in my thirties who desires marriage and children but can't seem to find it.
Nice to know I'm not the only one who feels this way.
Posted by Michellothegreat at 1:27 AM